From Limeridge to Loutit
Limeridge Fiddlers 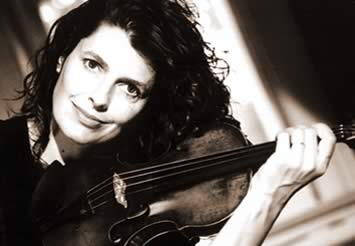 Produced and arranged by Anne Lindsay & David Woodhead; engineered by Jim Morgan at Acrobat Music, Pickering, ON and by David Woodhead at The Woodshed, Toronto; Mixed by John Switzer at Number Nine Audio; Mastered by George Graves at The Lacquer Channel

As a child I was taught that eavesdropping was a no-no. It was rude to listen in on other peoples' conversations. As a musician, I couldn't have found my own voice unless I'd listened in.

Music began to take over my life very early on with days split between high school, the Conservatory, church choir and my first folk / rock experiments. I listened to as many violinists and bands as I could: Zappa, Menuhin, Vassar Clements, Jean Luc Ponty, Stephane Grappelli, Joe Venuti, The Grateful Dead, even Jimi Hendrix. I threw off my middle class mores and ran away with a rock band.

I decided it was time to start figuring out the jazz changes I'd fallen asleep to on late night radio as a youngster, but I could still feel the voices of the classical masters I had grown up studying. By then, other voices had started making themselves heard. I studied South Indian drumming, music from the Karnatak tradition as well as Celtic and Klezmer forms. I couldn't stop listening in.

All this time I was on stage backing up other performers on concert and festival stages, in clubs and bars, playing in bands, string sections and chamber ensembles. I've had the pleasure of working with so many fine artists over the years.

Raising a family never stopped me from performing, but for about eight years, when my children were very young, I found no time to compose music. When I began to write again it seemed as if all those diverse influences and experiences, all the unconnected conversations I'd overheard, had blended into a single, unbroken stream of musical language, rich in character and flavour, with its own tone and texture, ready to be expressed by one voice, my violin.

This collection of original compositions reflects where I am now - a veteran performer just as comfortable delivering a simple, heartfelt ballad as I am rocking out on a wailing fiddle-driven groove. Music doesn't make distinctions, it finds its way into every heart. I feel very lucky to be part of this limitless adventure.

1. Latin Stroller - A romp along the sidewalks of downtown Toronto in February, written while pushing the baby carriage into a sub-zero head wind.

2. Lookout - Not a cautionary command, but the name I gave a dream home that I had planned since childhood. This tune appeared when I realized that the dream wasn't going to happen. There's something very liberating about letting go and moving on.

3. For The Children - For Emma, Miranda, Luke, Riley, Teo, Caley, Jesse, Raffa, Julia, James, Kit, Tosh, Chloe, Tyler, Melissa, Reed, Kai, Brett and Jenn Bo. This tune is dedicated to all the children around the world whose lives are so very different from ours.

4. Smooth Arm - A geographical location or a part of the anatomy? Either way, it's a good time!

5. Eavesdropping - One day I was out for a walk and was inspired when I overheard the unintelligible but tuneful mutterings of a stranger wandering past me. The cadence of his speech haunted me all the way home and before I knew it had transformed itself into this piece.

6. Emma's Dance / The Hills Of Mono - The first tune was written sitting on the backporch of my in-laws farm overlooking the Beaver Valley. As I fiddled my four year old niece came out and started dancing. This jig was written at my parent's farm in Mono Township where I've been going since I was one year old. Both farms are my heartland on the Niagara escarpment in Ontario which was recently declared a UNESCO World Biosphere reserve.

7. Rita - A Toast to the Muse and those she moves.

8. Annie McClelland's Lament / She Kicks Up Her Heels - We all feel our age as we get older but here's to the moments when we don't.

9. Blues Not - I started writing this tune and then realised that technically it wasn't a blues. Try introducing this one onstage without getting into trouble!

10. Ode To A Coffee Table - As a freelance musician, I find myself in all kinds of situations serenading the rich and famous, watching an elderly person smile at the memory of a melody from years ago, playing for square dancers under the stars, fiddling up a frenzy for Maple Leafs fans at the Air Canada Centre. Sometimes I'm useful furniture in other people's lives. This tune is my ode to the delight I take in walking out the door with my violin often not knowing where my music and I will find ourselves.

11. Leaves, Koochee, Kingho - One week, a cottage with no electricity, three young boys and lots of rain. Many games were invented, including this one. As my youngest son danced in the candle light and the wind whistled in the trees, this tune found me.

12. Harry Brunk's Adventure - A David Woodhead composition inspired by the somewhat mysterious model railroad hero Harry Brunk, who is devoted to recreating the entire Colorado and Southern 3 foot gauge Clear Creek line in miniature! A deserving celebration for any one who follows an unusual path for the long haul and defines his own reward.

13. Cornell - A tune about doing what feels right, for all the right reasons. Inspired by the playing of Cornell Dupree (Paul Simon's guitar player). 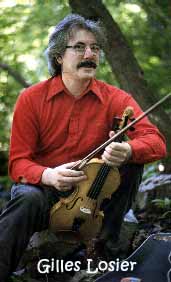 (Note: Some of the Tracks are songs; I will list only the tunes. ed)


The Tin Flute & The Flogging Reel - the Tin Flute was inspired by the playing of Cathal McConnell, flute player with The Boys of the Lough, and the range of a single row melodian. This tune fits fiddles, flutes and squeezeboxes comfortably. The Flogging Reel is a seldom played version of this reel, which comes from the playing of Richard Hughes, formerly of Pittsburg, now of Australia. This tune can be heard in Cape Breton.

Bonapartes Retreat - The origins of the tune are veiled in legend. It was supposedly composed by a piper in Napoleons army. After the Napolionic wars, this tune found its way to the southern US. The first of the two versions played here is unfluenced by Scottish pipes and a version learned from some Texas fiddlers. The second version comes from Louisiana and is played in the Cajun style.

The Offering - Losier composed this pipe march as an offering to the fine Cape Breton fiddlers and pipers. The warmth of the people and the breathtaking beauty of the Cape Breton landscape inspired this tune. He restricted the melody to the nine notes of the Scottish bagpipes. The words were suggested by the sense of longing evoked by this deep-felt melody.

Mrs Calder of NDG & Letoile du Marin (Mariners Star) - Losier composed both of these reels. The first tune can be played on the Scottish pipes but both tunes suit the small squeeze box.

Gilles Losiers exceptional range of musical abilities have contributed to his wide reputation in the field of folk and country music.

Since the beginning of his professional music career, in the early Fifties, his talents as instrumentalist, accompanist, arranger and composer have been recognized at home and abroad.

Gilles Losier has been invited to folk festivals in Canada, The United States and Europe. He has accompanied or performed with many outstanding artists, such as Jean Carignan, Angèle Arsenqult, Philippe Bruneau and Kate and Anna McGarrigle. To his credit are numerous television and radio shows.

With the help of his electronic keyboards and his synthesizers, and based on his intimate knowledge of folk music of all kinds, Gilles Losier has also indulged his gift for composition. Well-grounded in tradition, he is able to project a rich musical heritage into new and vibrant music.


Joe Loutchan, Yukon Fiddler On The Loose on CBC Northern Service broadcast recordings, is well known in northern Canada and delights in entertaining groups of all ages and sizes. Joe has rare qualities of musicianship, combining elements of folk, jazz and classical music. many Canadians first heard the sweeps, dips and ornamentations of Joe Loutchans music while watching Canada Day celebrations televised from Yellowknife. Joe is also a big game guide and outfitter who learned to play the fiddle by listening to the radio and to records. He began playing blue grass then moved on to classical and is now trying to create a unique sound combining classical with jazz. Joe needs no persuasion to pick up his fiddle and the spirits of friends as he stages impromtu concerts.


Clarence Loutit of Moose Factory, Ontario, has travelled throughout the James Bay Coast playing his particular style of fiddle music.

Over the years, Clarence has performed before thousands of fans throughout Northern Ontario by playing tunes he's learned off of different tapes and LP's. Now he has recorded some of these and a few of his own compositions including a very special tune - titled Moose Factory Special.


**labeled in Cree on the cover - no translations