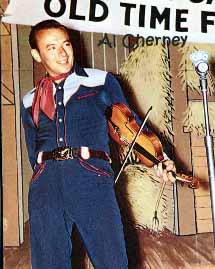 
On August 5th, 1960, Al Cherny of Wingham, Ontario, stepped on the stage of the Annual Old Time Fiddle Contest in Shelburne, Ontario and played a waltz, jig and a reel. Twenty-four hours and 114 contestants later, Al Cherny was declared the North American Open Champion and also won the Novelty class Championship. Al also won the novelty class the previous year and was runner up 6 years in a row - 1960 was Als big year, two championships at a time - and the first time a Canadian old time fiddler ever to win both.

In Order to give Al the best professional accompaniment on his first long play album, Arc records obtained the following specialists for the recording session (above).


I first met Al Cherny in 1955, in Wingham, Ontario, while making a guest appearance on CKNXs popular Barn Dance Show. We became close friends, and later, in 1961, we became working buddies on a CBC television show called Country Hoedown. From the start I recognized Al as someone who wasnt merely content to play his best. he must always strive to improve. This sort of determination won him the 1959 Novelty Class prize at Shelburne, Ontario, home of North Americas top fiddling contest, and further showed itself evident in 1960 and 1961 when he re-entered and - for those consecutive years - won both the novelty and old time (Open - ed.) classes. He was the only Canadian in the fourteen-year history of the contest to achieve this distinction. Medicine Hats Frank Novak, who taught Al as a boy, can boast an all-time pupil.

Since he joined Country Hoedown, Al has become one of the most popular artists in the show. From coast to coast of Canada - wherever he goes - whether its entertaining troops stationed in France, England, Germany or the United Arab Republic - his sparkling fiddle and his warm down-to-earth personality bring storms of applause and many return invitations.

One of his appearances took Al to Montreal, Quebec, where he was asked to perform for Prince Philip and the Commonwealth Conference. He found that his cowboy accompaniment turned out to be the Montreal Symphony Orchestra! What did he do? Well, lets just say he led them a merry dance.

Since last year when he joined the CBC Tommy Hunter Show, just about every fan letter asks for an Al Cherny fiddle tune. I should know. I read all the mail personally. In this album Al has tried to include the tunes that you have asked for most frequently. I congratulate your choice.


Al Cherny and his fiddle have been partners for a long time. Al started playing a very young age and has been going strong ever since. No wonder he sounds so great, and no wonder hes been heard in so many places, all the way from France to the United Arab Republic. In country music, Al Cherny has found the outlet for his exuberant talent. His jolly, spirited technique keeps your own feet tapping as you listen, makes you feel like getting up and taking a turn with your partner. Its hard not to dance when you listen to this gay, lively music, as much fun as an old-time country Hoedown. Once youve listened to the collection of fine tunes on this recording, you will know why they say Al Chernys playing is really blue ribbon every time!


The Ukraine. Birthplace of my parents. Home to my relations: uncles, aunts, and grandmother (Babushka). This is my heritage. I learned to play Ukraininan tunes as a child in Medicine Hat, Alberta. Weddings and dances were to social life for a Ukrainian; tunes and the instrumentals made up an important part of any function. Listening to them, I am sure you will all feel the sense of excitement and activity that is so characteristic of a Ukrainian function. I hope you will enjoy some of the traditional French-Canadian numbers which I have included. As you are aware, I have been a 'regular' on the CBC Tommy Hunter Show. Many of the selections on this album have been played at one time or another on the show and I hope some of your favorites are here.

Produced by Lynn Russwurm and Grant Heywood; Restored and Engineered by Mike Striver at Freightyard Studios

Al Cherny "Live"! Yes, it's true, here it is some thirteen years since one of Canada's greatest fiddlers was cut down in his prime by the dreaded cancer. Al was always a very energetic person, a going concern who seemed to find it hard to sit still. Very highly professional at his chosen career, he could make a fiddle sing like few before him or after him. You'd never hear that Al Cherny would miss a date, or that he didn't conduct himself professionally at all times. But for all his seriousness, Al enjoyed life to the fullest and was himself a bit of a practical joker.

A Canadian Westerner from Medicine Hat, Al's first professional touring groups were The Sons Of The Saddle, also The Stoltz Brothers. In fact, Al recorded The Orange Blossom Special with The Sons on a 78. Then Al got a call from Earl Heywood that a fiddler was needed for the small musical empire that revolved around CKNX in Wingham, Ont. Al caught the first train out and from that time on there was no looking back. He played in the Barn Dance Gang, under Earl Heywood, then with Slim Boucher's legendary Golden Prairie Cowboys and numerous TV and radio shows like The CKNX Barn Dance, on TV's Western Roundup, etc. He took part in the Shelburne fiddle contests and came out the winner numerous times. Then came the CBC shows out of Toronto. Meanwhile the recording had started, and after a single or two on Quality, he did his first album for Arc. RCA eventually snapped Al up for a number of albums on the Camden label. Tommy Hunter signed Al up for his TV show, and Al stayed as a regular for almost 30 years, until his untimely death.

Now about this album: up to this time Al had never done a live album. We were fortunate to discover a treasure trove of live Al Cherny cuts from various CKNX TV shows, that someone at the station had taped directly from the board and so we had recording quality tapes of the great Al Cherny in the early days of his career. What a treat it is to hear the musicians whoop it up along with Al on some of these great fiddle standards, there's certainly no lack of exuberance and spontaneity in these cuts, listen to this version of the Orange Blossom Special and you'll know what I mean. These shows were live on the air, not pre-taped like they do today, the enjoyment of the music came through loud and clear. Announcing the shows are some of the greats from CKNX like Jack Kingston, Johnny Brent, Earl Heywood or even Al himself. And through the miracle of modern recording we would like to share these great sounds with you.

Thanks to Marion Cherny for her generous co-operation on this project.

written by Barn Dance favorite Ross Mann, this is one of several Mann compositions that Al recorded.

One of the most visible Canadian fiddle players, Al held down the fiddle chores on the Tommy Hunter TV Show on CBC throughout most of its run.

Back to the Main Index