As the 1990s began, so did Stevedore Steve's interest in performing again. Perhaps it was because of his performance on At Home Tonight, Gordon Stobbe's weekly TV show from Halifax shown regionally on ATV. 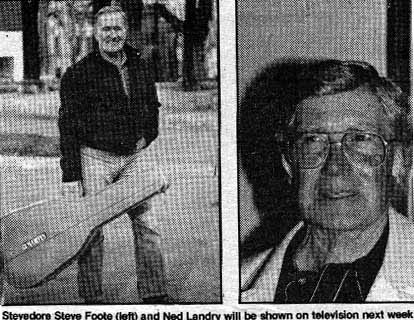 Maybe it was the feel of finally taking to the stage again and hearing the applause, of performing and feeling whole again. Whatever it was, Steve Foote was using the Stevedore Steve moniker again for the first time in nearly 15 years.

Connors,back on the touring circuit again, had dropped in to see him around this time. He traded Steve some money, to buy himself a good Martin Guitar, for the rights to a few of his songs. Indeed, every time I made my annual pilgrimage down to New Brunswick for a visit I was amazed at how much he had improved on the guitar. The spider-webs were definitely off his fingers and although he always winced whenever he made a mistake, his errors were my desires. He was such a good picker!

Kevin Nan and I visited again in 1990, this time with our good friend Paul Lyon tagging along. By now the Toronto contingent was becoming much more than a fan club of sorts, we were fast becoming good friends. I no longer looked at Steve Foote as just The Stevedore; now he was Steve Foote, my friend. 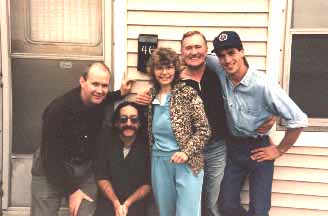 (Paul Lyon, myself, Gini, Steve and Kev, 1990, in front of their home on Garden Street in Saint John)

It was on this visit that we were informed that Stevedore Steve had been nominated to join the ranks of country music greats of New Brunswick. He was to be inaugurated into the New Brunswick Country Music Hall of Fame on the 30th of June, 1990. 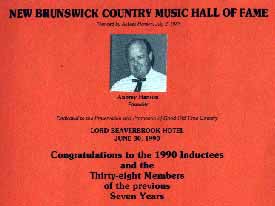 This was indeed a great honour. Stephen J. Foote would be joining the likes of Don Messer, Ned Landry, George Hector, Duke Nielson, Marg Osborne, Ivan Hicks, Freddy McKenna, Charlie Chamberlain, Earl Mitton, Mavis O'Donnell, Curtis Hicks, Wilf Carter, Gerry Taylor and others. He was to be inducted along with Pat O'Hara, fiddler Jim Morrison, Curtis Rogers, Al Hooper and Eddy Poirier. There would be a gala event at the Lord Beaverbrook Hotel with the Premier of the Province in attendance. Not only did Steve receive this humbling award, this cherished place in New Brunswick honour, but he would also receive a citation from the Premier, The Honourable Frank McKenna as well. 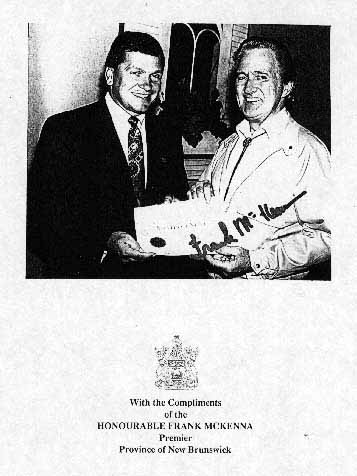 This had to be the best day that Steve Foote enjoyed as Stevedore Steve in many, many years. For this reason alone, it was worth his while coming back, older, wiser and obviously well loved.

I made yearly journeys to the Maritimes for a number of years, visiting with my family or my friends, and always stopping off in Saint John, parking the car around the corner from Garden Street. From that first encounter with the chicken sandwiches, we graduated to dining at Vito's, a fine, local Italian restaurant. I would always check and ask Steve if there was anything he needed from Toronto:

"Just bring some guitar strings - they're so damned expensive here."

In 1993 Stevedore Steve was asked to perform on the New Brunswick leg of Stompin' Tom's cross-country tour. There would be four dates and Steve would be required to sing three songs in the opening set to which he had agreed. The exposure of performing on such a tour goes without saying. But something happened! After just two shows Steve either quit the tour or he was fired, depending on who tells it. The two hobos who lived the life of the road together, who shared so many tears and laughs, and even a last chocolate bar together, who had known each other intimately since they were fifteen years old, just didn't seem to get along anymore.

Connors was perplexed! No matter how he tried to help Steve out, he couldn't seem to do any good. He spoke to me in the mens' room of the Matador Club in Toronto one night and shook his head as he tried to figure out what was wrong.

"I gave him money to buy a good guitar; I invited him to perform on my tour; I don't know what's with the guy. Everytime I try to help him out..."

Steve's answer: "Tom Connors is always welcome in my house as long as he leaves Stompin' Tom at the door."

There is an obvious animosity that dates back a couple of decades. It is just too bad that they couldn't see eye to eye. All I know is that they still both love each other dearly.

As far as Stevedore Steve was concerned, if he was going to make it back onto the music scene, it would be without the help of Stompin' Tom Connors.

Back to the Index
The Second Musical career of Stevedore Steve - part 2, click HERE
© 1999 & 2010 by Steve Fruitman for Back To The Sugar Camp ®