Steve and Gini Foote moved back to Saint John shortly after declaring bankruptcy. There was a lot of bitterness and anger as a result of his demise as a major performer on the Canadian country music scene. A lot of those emotions were directed towards his friends at Boot Records, but he was in such a state of confusion at the time that the only way out seemed to emanate from his old stompin' grounds, his home town by the Bay of Fundy. Gini had never really lived in New Brunswick before so for her this was a major break with the past. As far as she was concerned, they could take almost everything away from her and her husband except for the only real thing that mattered, their love. As long as they were together, as they had been ever since they first hooked up, little else mattered to her. Somehow they would survive. 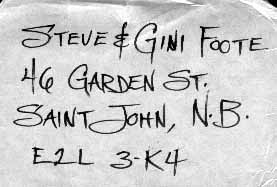 At first Steve was determined to fight his way back into the business but every time he picked up his guitar, it cried. This prolific songwriter could only spew out words of anger and regret, but songs kept coming to him nevertheless. He had to consciously turn them off in his head. This urge to create conflicted so much with his inner feelings that he went into an emotional exile, a long winter of hibernation, selling his guitar and not listening to music, not even allowing songs to begin humming in his mind. Stevedore Steve was the creation of the music business; Stephen J Foote - sans the music - was now ready to step forth. At first it felt a little odd to be totally out of the business; people still recognized him out on the street as Stevedore Steve, but in his mind he was just an ordinary guy about town.

Steve had the training required to survive: he knew what it was like to be a hard working man. He could do just about any odd job requiring manual labour; the odds were that he had done that sort of work before, during his years as a romantic young hobo. But times were changing, it was getting tougher to find decent work, especially in the Maritimes. And Steve Foote wasn't getting any younger either. Now in his forties he had all sorts of strong young men to compete with to earn a decent living.

He eventually found a good job working for a construction company. Saint John, New Brunswick, the oldest incorporated city in Canada, was run down and sooty. The City fathers decided to do something about it; a redevelopment project was given the go-ahead, a project that would see massive change to the downtown core. The warehouse by the pier where the stevedores used to prowl was to be turned into a mall housing shops, fine restaurants and a museum. The city blocks across the road would change the downtown of old into a year round, climate controlled shopping district, complete with new city council chambers and municipal offices.

This meant a lot of good jobs to the people of Saint John. It also meant that Steve could work close to home, close to Gini, and close to the waterfront docks of old Saint John.

Things went well until an accident put Steve out of commission. Something to do with a concrete slab being put into place high above the city. Steve's back  suffered great pain and he couldn't walk without difficulty; even laying down flat as a board did little to relieve him. He was put on disability payments and then on welfare, sharing a subterranean flat with Gini. This was probably the lowest point in his life, unable to play his music, unable to work and earn a living. What else could go wrong?

But Steve Foote is an extraordinary man, well read, self-educated, artistically inclined and very talented. In his mind he never gives up hope, and with Gini's help and guidance, he knew that it was only a matter of time before something positive would come out of this.

Back to the Index
To go read about the rediscovery of the career of Stevedore Steve, click HERE
© 1999 & 2010 by Steve Fruitman for Back To The Sugar Camp ®